The Andreew Investment Group AG is a consortium operating throughout Europe consisting of 9 enterprises and more than 1,000 employees.

Andreew Investment Group AD is a holding company and some of its affiliates were founded back in 1989. The companies’ line of business is focused on distribution, logistics, operational leasing, hotel accommodation and real estate portfolio management. 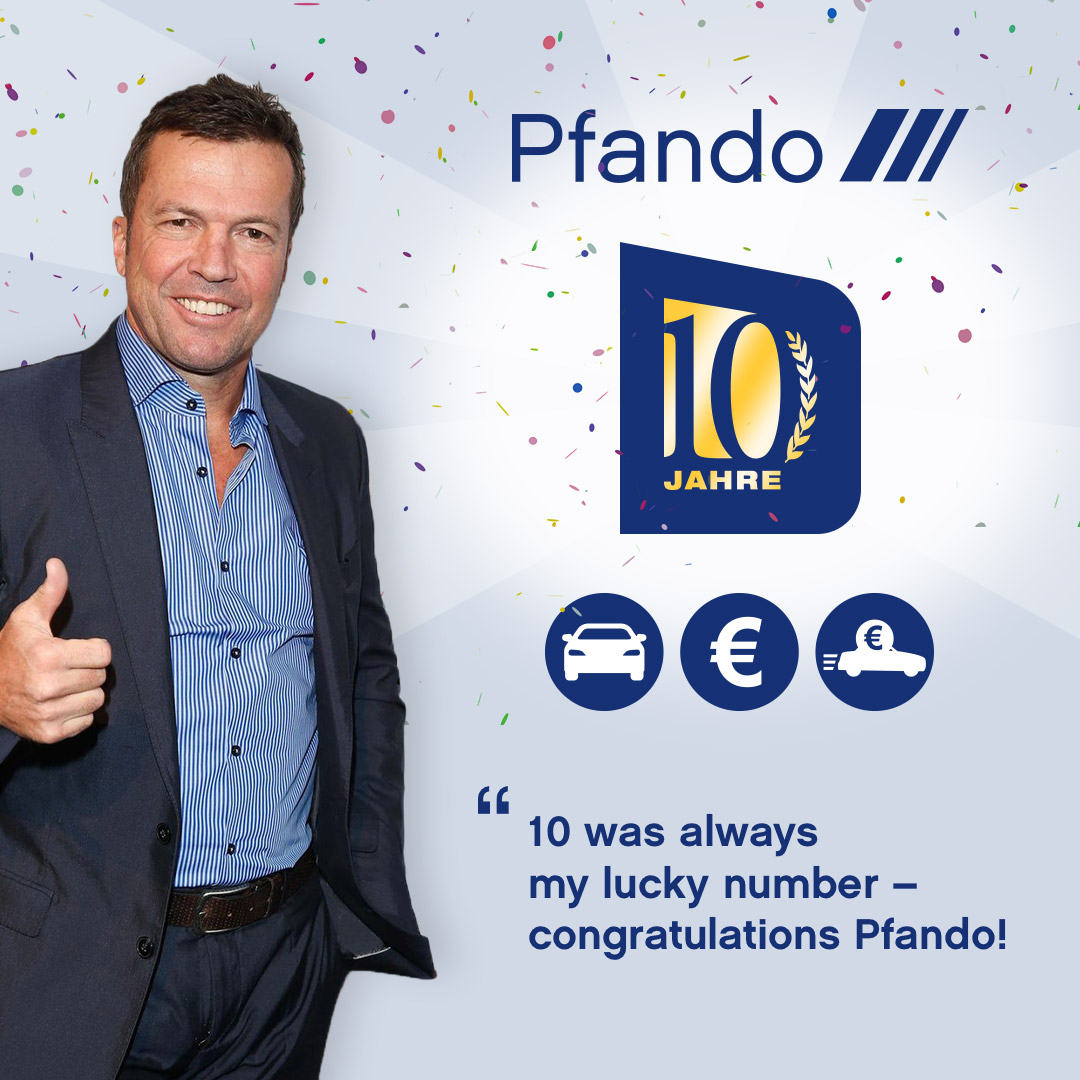 Pfando celebrates its 10th anniversary on 2 November 2020. With 25 branches and 80 employees, Pfando is the leading German company in the sale and rent-back sector. For 10 years, dozens of people a day and now more than 30,000 satisfied customers across Germany have put their trust in Pfando. We would like to thank our customers and especially our team for their trust and long-standing loyalty. After all, it is our employees who are responsible for the success and development of the past years. Without them, Pfando would not be the company it is today. Due to the current situation, there were no big celebrations, and thanks for their dedication were expressed personally within the scope of the possibilities. The offices were decorated with balloons and flowers, and small gifts were handed out as a token of appreciation.

Pfando announces new brand ambassador
To mark its 10th anniversary, Pfando is announcing its new brand ambassador: the record-winning international footballer Lothar Matthäus. Pfando wishes the honorary captain a warm welcome to its team and looks forward to working together with him. The unparalleled career of the 1990 world champion represents the values of the financial services provider: loyalty, team spirit and motivation.

About Lothar Matthäus
Lothar Matthäus comes from Herzogenaurach, Germany, and has been playing football since his early childhood. As a midfielder, Matthäus won all of the possible titles that can be won in the course of a footballing career: He won the German Championship and the UEFA Cup several times, as well as achieving DFB Cup victories and the World Cup and European Championship titles with the German national football team. Matthäus was named World Player of the Year in 1991 and German Footballer of the Year in 1999. After his active career, Matthäus coached various foreign league teams up until 2011 and now works as a TV expert on Sky.

Despite the current economic uncertainty as we face times of quarantine restrictions and challenging business environment, Andreew Investment Group (AIG) has kept its tradition to continue with the charity work for non-profit organisations in Bulgaria and Germany.
This year our focus is on charity projects for socially disadvantaged children. The financial support provided by AIG ensures that these non-profit institutions continue their charity work.

This year we have donated more than 100 000 Euros in total to four organisations, which deal with socially disadvantaged children.

The main focus of these projects is on children and their needs. Sometimes the needs may be basic things like having a roof over one’s head and warm meals. Sometimes the children lack basic social skills. As they come from socially disadvantaged families, they often tend to be outsiders unable to integrate into normal social environment. Therefore, the educators and trainers work on building skills and values, which will ensure their further fit into the society. The whole process of support is set in such a way that children experience love, security, stability, acceptance and synergy.

The respective organizations which received our donations are:

The SchutzengelWerk charitable organization in Germany works with children, who lack proper nutrition, education, social and cultural skills. The foundation supports difficult children, who need specialized help. Our donation ensured the first vacation trip ever for such children. It is for first time in their lives that they would enjoy an excursion.

Die Arche organisation in Germany works on different projects to support children and young people. The focus is on children’s free time. This includes educational support in preparation homeworks and lessons for school, as well as meaningful leisure activities. The foundation also provides free meals. Although the German society generally lives in welfare, there are still children, who do not have access to regular meals at home. Our donation will provide warm meals for these children in Berlin during the whole year.

Our charity project for the KinderHerz foundation in Germany ensures support for children with cardiovascular problems, as well as further development of scientific research in this area.

We also took part in the social projects of Concordia, Bulgaria with a donation of 22 000 BGN. Concordia is a non-profit charitable organisation which helps children who live in extreme poverty with lack of housing, clothing and food. Thanks to Concordia these children have the opportunity to grow in a family-like environment. They can live in safe and stable surroundings and have access to psychological support, education and social training. AIG has provided the financial support for warm meals, clothing and education for the whole year.

Exclusive rights for the distribution of Werner & Mertz products

As of January 2020 Fortuna Kom LTD has obtained the exclusive rights for the distribution of Werner & Mertz products on the Bulgarian market.
Due to its renown brands such as Erdal, Frosch, Emsal und Rorax and over 150 years sustainable business development, Werner & Mertz has been recognized on the European market as a very innovative company in the field of household cleaners & detergents.
Frosch is the European No. 1 brand for ecological cleaners with the highest market shares in almost all European countries.

Fortuna Com Ltd. had its 30th birthday celebration at a large event on 29 November at Bansko winter resort. The celebration was attended by all employees from all over the country.

Fortuna was founded at the dawn of democracy in 1989 and since then its continuous growth and development has never ceased. Currently Fortuna is one of the largest Bulgarian distributors with a wide sales network throughout the whole country. In 2019 it was awarded and recognized as being the number One best distribution company in Bulgaria. Fortuna represents some of the most renown global brands in the FMCG sector like L‘Oreal, Merci, Toffifee, Heinz, Kraft, Zewa, Libress, Wilkinson, Frosh, Erdal and many others.

The 30th anniversary was celebrated with famous Bulgarian stars – Vasil Naydenov and Krasi Radkov, who performed exclusively for the employees of Fortuna. Longtime employees received special attention and recognition with rewards and incentives. The final result was a remarkable, exciting and a memorable birthday celebration.

We wish all the best to Fortuna and as always to remain a successful and preferred Bulgarian partner.

The PROGRESSIVE conference, which is the biggest business event in Bulgaria in the FMCG sector, took place on 11 and 12 April in Plovdiv. The most successful FMCG companies and brands received their awards. We are proud to announce that FORTUNA-KOM earned the very top place. It was awarded and recognized as being the BEST Distribution Company in Bulgaria. 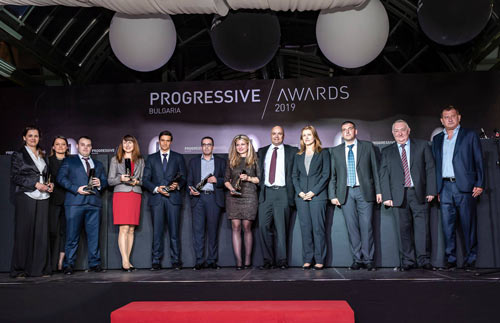 ProImmobilia Prio Haus- und Grundstücksverwaltungsgesellschaft mbH has been renamed from ProImmobilia to REALIUS GmbH. To avoid confusion under the previous name with other market participants, we have decided to make a clear and marked distinction.

However, with our new name, we also intend to achieve a clear allocation and integration into the group of companies within the Andreew Investment Group (AIG) and Andreew Holding GmbH; REALIUS has adopted the parent company’s logo here.

REALIUS has the word “real” in its name which is an abbreviation for real estate. A short suffix is added to complete our new name, making it sound harmonious, REALIUS.

Fortuna Kom OOD continues its upward business development, becoming a partner of the Kraft Heinz Group.
Fortuna will be an official representative and distributor for all of Bulgaria for the food giant’s products, which are the worldwide number one.

With its continuous growth for 30 years since its establishment, Fortuna has proven itself as a preferred partner and national distributor of leading global brands and manufacturers. The trust and trading rights granted apply not only to the retail but also to a new trading line dedicated to products for the hotel and restaurant business. Accordingly, Fortuna Kom has been establishing a new division and sales organisation, making its next jump on the market – increasing its market share and expanding its trading network at national level.

On 25 April 2018 Andreew Investment Group AD signed a notary agreement, which increased their investment portfolio by acquiring another modern logistics center in Sofia.

The new acquisition consists of two existing buildings – total of 8,430 m2 warehouse and office premises, which are built on a 55,000 m2 plot. Additionally, further business expansion is planned, as Mr. Vincent Andreew, the CEO of Andreew Investment Group AD, explained. Another huge logistics facility will be built on the vacant part of the plot with approx. 24,000 m2 of rentable space.
The new acquisition strengthens further the Andreew Investment Group AD's market position.

For another consecutive year, ProImmobilia has achieved successful business results.

Modern, with open spaces and European design ― these are the words that can describe the renovated offices of Andreew Investment Group AD which were opened in the Bulgarian capital Sofia. The offices of the subsidiaries Fortuna, Transcapital and Lion hotels opened doors at the end of November 2016, followed by the headquarters of Andreew Investment Group which started functioning at the beginning of January 2017.

One of the leading Bulgarian architecture and design companies got an insight into the philosophy of Andreew Investment Group AD and put it professionally into practice. The modern look of the offices makes them compete with design concepts on an international level, achieving perfect harmony between style and functionality. Apart from the well-lit work spaces special attention has been paid to recreation and communication areas because it is important to make employees feel comfortable in the new offices. The green cozy areas create comfort zones, and the transparent open spaces optimize the exchange of information at its fullest extent.

Renovation and modernization is an investment which expresses best the company’s policy part of which are also the following goals:
- Enhance innovation and work motivation
- Facilitate and improve team work
- Increase work efficiency and produce higher results
- Unity and transparency

At the General Meeting of the Shareholders of Andreew Investment Group AD, held on 12.08.2016 the amendments were made to the Board of Directors of the Company.

We are pleased to welcome Mr. Nikolai Dimitrov as new member of the Board of Directors of Andreew Investment Group.

According to Mr. Vincent Andreew, CEO of Andreew Investment Group, Mr. Dimitrov is the best person for this position with his six-year managerial experience in the holding group. His primary role as a member of the Board of Directors is to support the CEO Vincent Andreew in the management and control of any activities of its subsidiaries.

Since its establishment end of 2014, Andreew Real Estate Holding has acquired about 20,000 square meters of residential and commercial properties in the city-centre of Berlin.

Fortuna Kom LTD has obtained the exclusive rights for the distribution of Zewa in January 2014.